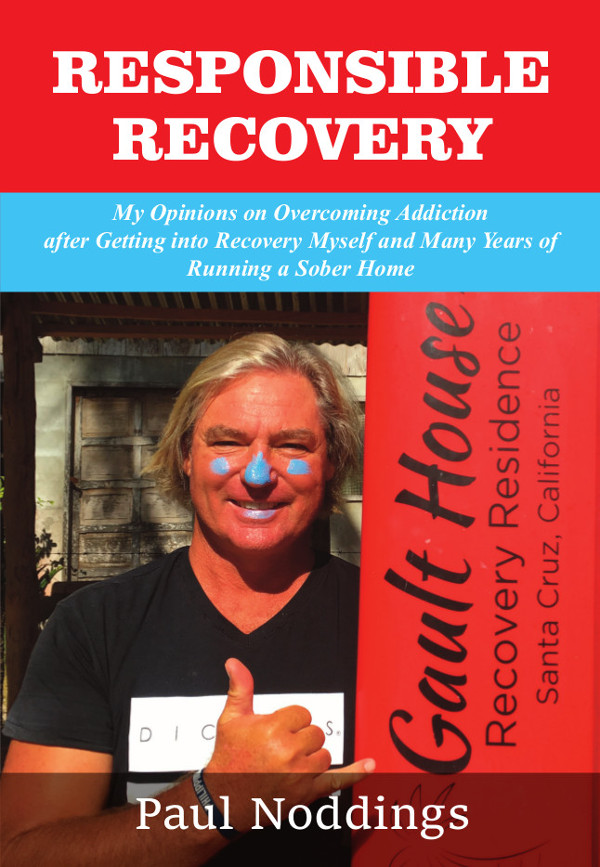 My name is Paul, and I am an alcoholic and a drug addict. Today, I am clean and sober, and I have been since January 6, 2015. I am also a landlord, who has years of experience running a residential complex in Santa Cruz, California, as a sober home.

I grew up on the coast of South Africa, and it was a good life. My parents were very loving and we went to the beach often. I loved to swim in the sea. By the age of 10, I had my own surfboard and I identified as a ‟surfer.” Now I am much older (56 years old at the time of this writing), and I still surf and I still identify as a ‟surfer.” Surfing is a healthy activity, an outdoors lifestyle. It is also a culture that has some dark spots. Heavy drug use was not common within my circle of surfing friends, though alcohol and marijuana were. As a young surfer, I looked up to the older surfers. Most of them were drinking beer and hard liquor and smoking weed. As I got older and stronger and became a better surfer, I was included in the group of older boys, and soon I was drinking and smoking too.

This was innocent experimentation, in my opinion. It is normal development of a teenage boy into a young man. My problems came much further down the line. I continued surfing throughout college, and I continued drinking beer and smoking weed. I tried smoking cigarettes, but I didn’t like them. They tasted foul to me; however, I liked smoking weed because it made me feel relaxed.

I always worked hard, doing intellectually demanding work during the day, and after work, I would play hard by surfing, playing rugby, and hitting the gym, but at night, in order ‟to relax,” I would smoke weed and drink beer. My problems with alcohol and marijuana were getting bigger, and I knew it for at least 10 years before I was able to stop. I tried to stop smoking weed many times, but it was never successful for more than a few days.

I was single, as I had never married, and I wanted to be with a loving partner. I had girlfriends over the years, but these relationships seemed to come to an abrupt end, and I would spend six months trying to figure out what went wrong before I would try again with someone new.

When I got loaded in the evenings, I would stay at home because I knew that I would not be able to attract anyone who I would be interested in when I was ‟bleeding from the eyes” and unable to talk without slurring my words. I found the loneliness crushing. On several occasions, I cried into my hands, because I was so lonely. It seemed that beer and weed were preventing me from finding a partner, but I was not able to stop using them and this seemed to be a vicious circle with no solution.

Then something dramatic happened. I went surfing at a surf break called ‟Four Mile.” It is four miles north of Santa Cruz, California, where I had lived for 15 years. I had been surfing Four Mile as my main break for many years. On this day, I didn’t walk along the base of the cliff to get into the water from the rocks, as I normally did, but rather I used the current to take me into the middle of the bay and I paddled toward the break. While I was in deep water in the middle of the bay, the dorsal fin of a large shark came to the surface of the water and it was swimming straight toward me at a fast speed. I was in a very bad position!

I was certain that this would be my last day alive. I thought that my number had been called by ‟the man upstairs” and I would die in a pool of blood and bubbles and no one would know until my surfboard washed up onto the beach. The shark was swimming straight at me, and I could see a fountain of water coming off each side of the dorsal fin. Time slowed down and my life flashed before me, including all the things that I had NOT done and that I had always thought that I would do, specifically getting married and having a child. My fear was extremely high, but I remained calm enough to make the decision to face the shark head-on and fight it. The shark submerged inches from the front of my surfboard and passed underneath me, and I turned, expecting it to come up behind me. It didn’t, so I paddled as fast as I could to safety.

It took at least two minutes to get to safety and my adrenaline was so high that I was not able to sleep for 72 hours. I couldn’t even lie down for more than a few minutes. I was so wide awake that I had to walk around bthe town of Santa Cruz through the middle of the night for two nights in a row. This scary event is still a major focal point for me, letting me know what is important to me. Smoking weed and drinking beer was not on my list of important things to do, as my life flashed before me.

I was not able to stop smoking and drinking immediately after this scary event, but it was the catalyst that propelled me forward toward recovery and leading a full life. After I had become serious about recovery from addiction, I relapsed four or five times before I was successful in overcoming my addiction. With each relapse, I got a little smarter about what would cause the relapse and I got a little more understanding of my personal problems that manifest as addiction. I realized that for me ‟alcohol and weed” went together like ‟bacon and eggs.” I knew that I had to stop BOTH to stop either.

A major asset to me in overcoming my addiction is Alcoholics Anonymous. I will forever be grateful to AA. The first time I went to an AA meeting near my home, introducing myself, ‟My name is Paul and I am an alcoholic and an addict,” a huge weight was lifted off my shoulders. I had admitted to a room of peers that I had a problem, and the problem seemed to become more manageable as a result.

No one ever did anything for me or gave me specific advice that I remember. It was simply me admitting my problems to others and knowing there is a place to go where there are other people who openly admit they have problems that manifest as addiction that are too big for them to handle on their own. That was a major step forward for me. It has become more and more clear to me that this type of HONESTY is extremely important to recovery!

I planned my detox date and I struggled hard to not use drugs or alcohol for the first few days. I was constantly telling myself ‟NO!” The first week was very difficult and the first month was almost as difficult. After three months, I felt that I had too much to lose to relapse. After six months, I felt much more ‟in control” of myself. It was also around the six-month mark that I could feel myself moving toward ‟a new life,” rather than constantly telling myself ‟NO” to my previous life.

I own a four-unit rental property, and as these units became available to rent to new tenants, I replaced the tenants with people who want to live in a sober living environment. I live on this property with my family, and we manage the property, along with a small management team who are clients.

I sometimes get cravings to use alcohol or marijuana, but they don’t last long and thoughts of using are replaced with thoughts about the chaos and misery that drugs and alcohol will bring into my life.

At the time of writing this book, my wife and I have a very active son, who is already learning to surf!

Does this book inspire you to be part of the solution?

I, Paul Noddings, the author of this book, am reaching out to investors and partners to develop Very High Density Metropolitan Housing, Detox Centers and Purpose Designed Sober Homes.

For many years, I have been a part of the solution to the drug addiction, mental health and homeless crisis in California, using my own capital. I would play a bigger role if I had the support of a philanthropic billionaire or access to significant capital.

If this subject is of interest to you, please contact me for detailed discussions: 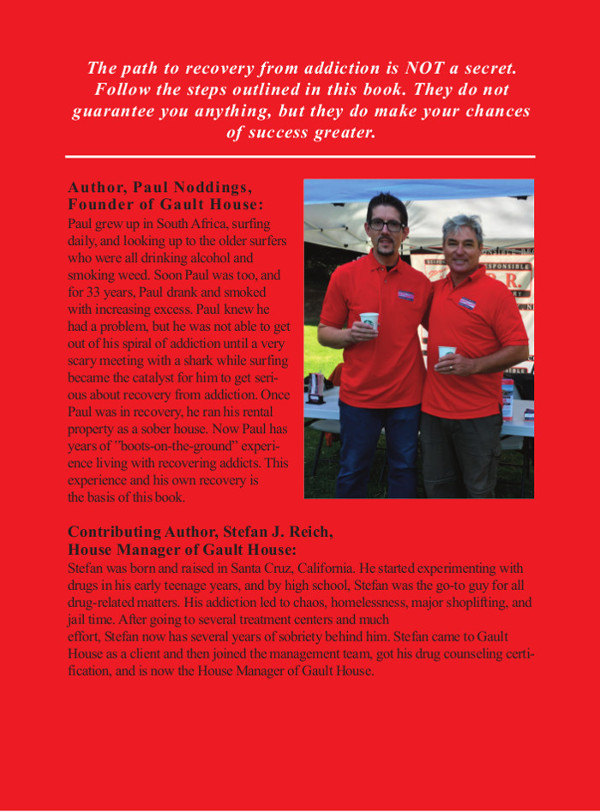